Speech Upik Sjahrir on exhibition ‘The Linggadjati Conference’ in The Hague 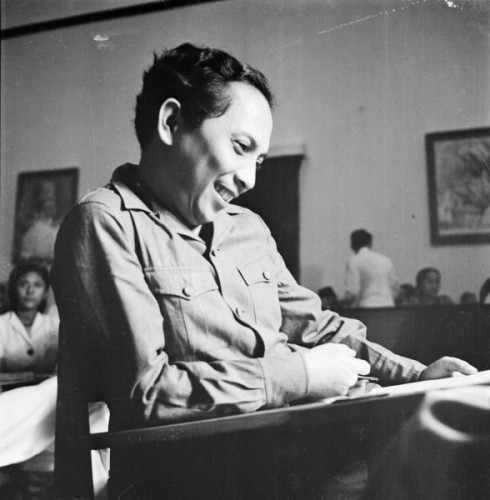 Allow me to begin by expressing my deep gratitude to the Embassy of the Republic of Indonesia for the Netherlands, His Excellency Ambassador Junus Effendi Habibie and his entire staff, also to the Director General for Information and Public Diplomacy of the Ministry of Foreign Affairs of the Republic of Indonesia, Mr. Andre Hadi and his staff, who have made this event – Seminar and Exhibition: The Linggadjati Conference: Bridge to the Future Indonesia-Nederlands Relationship – possible. Thank you very much for inviting me to speak at this happy occasion. I also want to thank the National Archives of Indonesia, the National Archives of the Netherlands – Stichting Indisch Erfgoed – and Stichting Vrienden van Linggadjati. To all respected speakers, our moderators, and distinguished guests: His Excellency Ambassador Juri Thamrin, His Excellency Ambassador Najib Riphat Kesoema, and the audience here today, it is really a great honour for me to speak in front of you. Once again, thank you.

I am not a historian, nor a law expert, nor am I an expert on politics. I stand before you today because I am the daughter of Sutan Sjahrir, Indonesia’s first prime minister, who played a significant role in Indonesia’s diplomacy in the early years after the independence of the Republic of Indonesia. Many people are unaware that Sutan Sjahrir had two children from his marriage to Siti Wahyunah in 1951, my older brother Kriya Arsyah Sjahrir, and myself, Siti Rabyah Parvati Sjahrir.

One hundred years ago, on March 5th 1909, papa was born in Padang Panjang, West Sumatra. I struggle to find the right words to express how I feel at this moment. Sjahrir, who held the position of the First Prime Minister of the Republic of Indonesia at the age of 36, is hardly known by the youth of today. His thoughts and endeavours are rarely mentioned in history books, despite the fact that it is undeniable that his political diplomacy was crucial in ensuring international recognition of Indonesia as a free and independent (sovereign) country – both de facto and later on de jure.

This afternoon we are gathered in the country that once opposed efforts of the Indonesian people to achieve independence. Together, we are now here to discuss the Linggarjati Conference in which Sutan Sjahrir was the head of delegation of Indonesia. By no means does this event aim to create a personal cult of Sutan Sjahrir. Nor should it be an opportunity to be nostalgic of times that have since passed. My hope is that this event becomes an opportunity to reintroduce the role Sjahrir played as a national leader, who was also instrumental in the birth of Indonesia as a nation. Furthermore, I hope this event will encourage an open dialogue about Sjahrir and the relevance of his thoughts and political endeavours within the context of citizenship and nationhood in 21st century Indonesia. A series of writings on the dialogues that take place will hopefully be produced as well, among others to enrich the existing body of knowledge and history of Indonesia. Within the context of the Netherlands, I hope that the diplomatic relations built from the early days of Indonesia’s independence will continue to flourish and benefit our two countries.

I was not even three years old when my family had to go from one prison to another simply to spend time with my father. Since 1962, he was imprisoned without trial on allegations that were never substantiated. He was first held in Jakarta, then was moved to Madiun in East Java, which meant we would have to board a train and travel many hours to satisfy our longing for him. When he was moved again to Jakarta, seeing him was not easier. Mama had to arrange for a special visit pass every time we wanted to visit him. Sjahrir – a man of peace, who loved children so much so that when he returned from exile in Banda brought home with him three ‘adopted’ children – was unable to enjoy the love of his family and own children. Yet, as far as I can remember, he never showed sadness or anger over his condition. Each and every time we visited him, all we saw was joy and love. Sadly, when we finally had the chance to be together it was when Papa was permitted to go to Zurich for medical treatment; however, he was no longer able to speak. During our days in Zurich, every morning I would go to Papa’s room – still in my pyjamas since I wasn’t in school yet. I’d tell him stories of all sorts of things that came to my mind. Papa would hold me tight and laugh; tears streaming down his face. Confused at first, I asked Mama why he was crying. She told me that they were tears of joy. Not fully understanding what she meant, I continued with my morning ritual with Papa every single day I had with him. Another part of our lives during those days was classical music, which always played while we had breakfast. Those beautiful times lasted only for about a year, until on April 9th, 1966, Papa passed away – faraway from the nation and its people whom he loved so much and so deeply.

During my childhood I would often ask myself, “Why was my time so short with Papa, whom I loved so much? Why was the one we loved so much and were so proud of, held in prison, kept away from his family, for no clear reason and without trial over the false accusations made against him?”  These questions could have easily grown into hatred and anger in later years, had it not been for our mother. Mama was an amazing woman who had an abundance of love and patience. She would endlessly remind us that Papa always taught us to live free from suspicion and hatred. He may have been a small man, but he had a big heart. Our understanding and instilment of Sjahrir’s values was through our gentle Mama, relatives and also through Papa’s friends. I learned to get to know him even further on through his writings, and found him to be an honest man, a brave man who was willing to make sacrifices. He did not fight for his own personal interests, the interests of his group, nor for power or riches. Sjahrir fought for independence and human maturity, for freedom from oppression, exploitation and humiliation inflicted by one human being onto another.

Sjahrir highly valued morality and ethics in nationhood and citizenship. In his radio address at the commemoration of Indonesia’s first year of independence, he said: “Our struggle now, however strange it may seem, is none other than our struggle to obtain the freedom of the soul of our nation. We are a nation that believes in life, believes in humanity, and has hope in the future yet to come. We have learned how to use instruments of power, but we do not worship or pledge ourselves to power. We believe in a future that will come for humanity, a time where the power to constrict people’s lives will exist no more, there will be no wars, no need for animosity between human beings. As a nation that is returning to its youth we search for our energy as a nation with high hopes and dreams that are pure. We no longer believe in possibilities and a better life that is fuelled only by power… Our nationhood is only a bridge to reach perfect humanity, not to satisfy our own selves, and not at all to damage relations among humankind…our nationhood is only one part of our dedication to humanity…”

Sjahrir, a humanitarian who consistently fought for humanity, equality and justice, and cooperation among humankind, had to live his life in a nation – whose independence he also fought for – as a political prisoner who was never tried until his death.

A lover of classical music who could also play the violin, Sjahrir not only loved painting, literature and theatre, but he also studied them well. Education was always his passion. He was a constant writer, and an active ‘tonal’ actor during his university days in Bandung. Soccer and tennis were his hobbies, and in fact at one point he also flew light aircrafts. He was a compassionate man with a big heart, and also had a sense of humour. A continuous learner with a vision to the future that was way ahead his time, meant that many people of his time often didn’t understand or misunderstood him. Sjahrir, who fought through diplomacy, died far, far away from the nation he played a part in establishing and the friends, family, and people he loved so much.

In closing, I would like to read an excerpt of Sjahrir’s speech at the signing ceremony of the Linggadjati Agreement on March 25th, 1947: ‘The agreement we sign today is a first step towards freedom from this suffocating condition, a first step in our pledge to banish darkness and bring back a time of brightness and clarity, a time of objectivity. A time when the cry for ‘Freedom!’ no longer threatens humankind, but is instead a cry for humanity that will move each and every human being, in a new time of liberation where our humanity is easily moved by any utterance of humanity. The world is full of conflict, of dangers of war, of darkness. In Indonesia we are lighting a small flame, a flame of humanity, a flame of common sense, that aims to get rid of the darkness, the conflict that has ensued from and resulted in rape and destruction, suffocation, and darkness. Let us now care for this flame so it will continue to burn, and burn even brighter. May it be the beginning of light throughout the whole world.”

My hope is that the thoughts, values, morality and way of life, as well as the struggles of Sutan Sjahrir will be an inspiration to the youth and leader of nations today, and be a light that shines the souls of our people.