The Climate Village Project for Malino 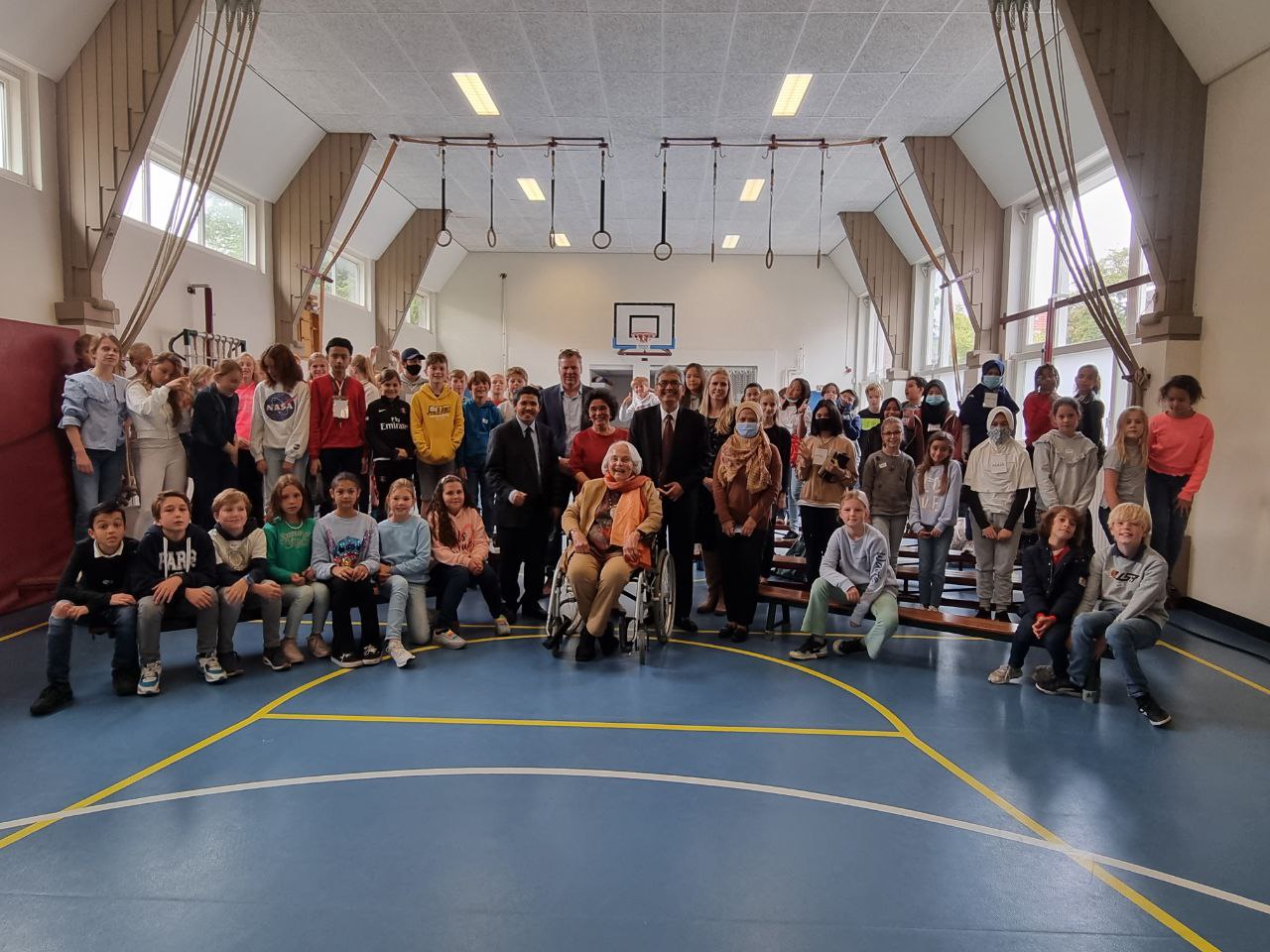 The Climate Village Project for Malino is a unique climate and civic education project created by the Herenwegschool Wassenaar and the Sekolah Indonesia The Hague (SIDH), supported by the Indonesian Embassy and Indonesia Nederland Society (INS). This collaborative project was conducted in the weeks before COP26, the Climate Conference in Glasgow. Based on its mission paper and a video report both schools were awarded the Climate Action Project School of Excellence. This recognition was awarded to 250 schools worldwide by Climate Action Project and Cartoon Network Climate Champions[1] on Climate Action Day 4 November 2021.

On 23 November 2021, students of the Herenwegschool Wassenaar and the Sekolah Indonesia Den Haag (SIDH) handed over the report on the Climate Village Project for Malino to H.E. Mr. Mayerfas, Ambassador of Indonesia to the Netherlands, and H.R.H. Prince Jaime de Bourbon de Parme, Dutch Climate Envoy, at the Indonesian Embassy in The Hague. 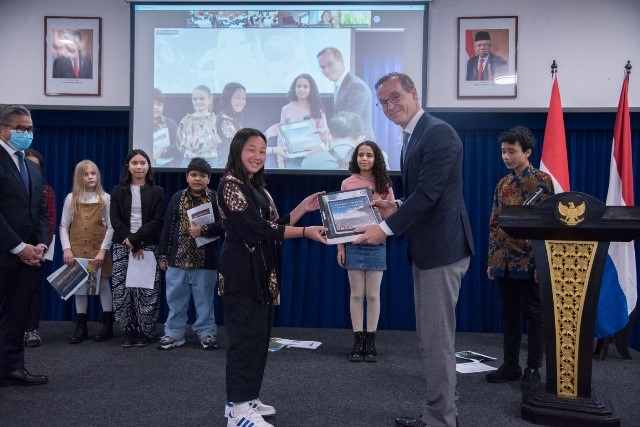 The Climate Village Project was a collaboration between fourteen SIDH students and fifty Herenweg School students, aged 10-14 years, conducted from 16 September to 1 November 2021, with the support of the Indonesian Embassy and Indonesia Nederland Society. The students built climate adaptation and mitigation programs based on the situation in Malino In the Microsoft program Minecraft. Through online interviews with two representatives of the villagers the students learned about the environmental challenges of Malino, a hill town in South Sulawesi. 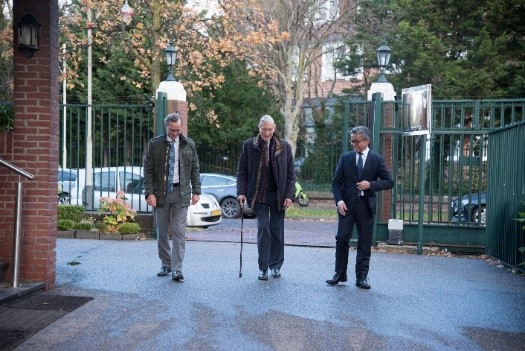 In six weeks the students had built a virtual Climate Village in Minecraft, in which they addressed seven main environmental problems in Malino: water, waste, food security, wildfires, deforestation, electricity, and climate related diseases. After the closing of the project six presenters and their ‘computer man’ prepared a power point presentation for the launching program.

Taking the floor at the Indonesian Embassy the six students proposed to build clean water filters; a waste management system; farming and a farming market; leading the river around the forest to prevent wildfires; tree plantation; applying hydroelectric and solar panels; and building a hospital. Meanwhile the seventh student guided the audience through the virtual climate village, built by the sixty-four Indonesian and Dutch children in the virtual Malino landscape, all projected on a wide screen. The audience in the room and all connected online were impressed by the quality, playfulness and relevance of the by the children suggested solutions.

The launching program was concluded by Former Dutch Foreign Minister and INS Trustee, Bernard Bot who then introduced the webinar by saying, “This project can stimulate and reach out to the policy makers. Hence, it would be good to integrate the project into the curriculum of primary education.” The webinar was moderated by Monica Bouman, member of the INS Board.

What struck Mr. Bob van den Steenhoven, Director of the Herenwegschool and Mr. Herman Tahir, Director of the Sekolah Indonesia, most on this learning adventure was the combination of real interest, fun and friendship the children developed while working together. They explained how climate education and social learning became key to this project. When the people of Malino were online, Mr. Herman Tahir welcomed them, thanking the local government for their cooperation and explaining how they had inspired the children to think with the people of Malino about the challenges caused by climate change. The children really felt connected to them.

Professor Arjen Wals (Wageningen University, who also holds the UNESCO Chair of Social Learning and Sustainable Development) said the Climate Village project might be further developed for sustainability learning but even more for social learning. Online from Indonesia Mr. Satryo Bramono Brotodiningrat, Coordinator for Sustainable Development and Climate Change at the Indonesian Ministry of Foreign Affairs, commented on the feasibility of the Climate Village Project to be implemented in the field, where Indonesia meets different environmental challenges. Mr. Dennis Jansen and Ms. Sarah Oey, Dutch Youth Representatives, who had just returned from the COP26 in Glasgow, said to like to stay involved with both schools for further follow ups of the project. So did Mrs. Anissa Triyanti of Utrecht University, who also had been a guest teacher, just as Mr. Rudi van der Aar.  Dr. Thomas Hoppe from Technical University Delft encouraged the initiative of the schools to early start climate education on primary and secondary schools. To conclude with Mr. Richard Meier of Randstad IT: “The Climate Village project is a promising resource for social learning and creative problem solving, and Minecraft can be refined for even more challenging applications.”

Ms. Yanti Kusumanto, a specialist on sustainability, social learning & stakeholder collaboration, unfortunately not being available, sent us a video-message. Since 2017 she has fostered Dutch-Indonesian youth partnership on SDGs and climate.

The video Climate Village project for schools. on Vimeo gives a good impression of the overall sphere, the children and their different cultural backgrounds, the teachers and their philosophy of social learning and problem solving, and the start of this project. Ernst de Groot, photographer, and Monica Bouman, coordinator, witnessed the first collaboration of the two schools in 2020. A small group of children representing both schools assisted the dignitaries who planted three freedom trees in Wassenaar to celebrate 75 Years of Freedom for the Netherlands, for the United Nations and for Indonesia. The children sang ‘We are the World’ and played angklung. The tree-planting-day was an initiative of Mrs. Joty ter Kulve, INS Trustee, supported by the Municipality of Wassenaar, The Borneo Initiative (TBI), the Indonesian Embassy in The Hague and Indonesia Nederland Society (INS). For every child of both schools a tree was planted in a TBI reforestation project at Kalimantan, Indonesia.

In the Climate Village Project, Mr. Jesse Kuijper, founder of TBI, was one of the inspiring guest teachers. He answered all the questions the children had about why our earth needs trees and why planting trees is so important.

On 30 September Mrs Joty ter Kulve, INS Trustee, and Mr. Freddy Panggabean, Deputy Chief of Mission of the Indonesian Embassy, were welcomed by the school directors, students and teachers of the Climate Village project at the Herenwegschool (photo frontpage). Everyone involved felt honoured by the warm embeddedness of this project in the hearts and minds of its inspirators.

What everyone connected to the Climate Village Project for Malino experienced was the wonder of collaboration across cultures, generations and histories, generating new connectivity and friendships.

[1] Cartoon Network Climate Champions is a climate change awareness initiative that aims to inspire children to take on daily challenges that together can make a big difference to the health of our planet. It was developed in collaboration with WWF (World Wide Fund for Nature).